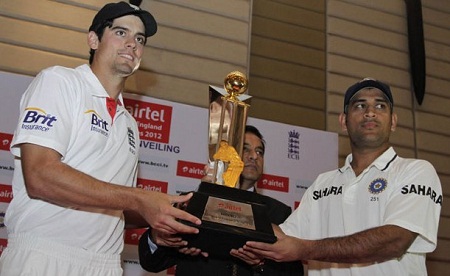 Where the team had gone wrong? Below is the my analysis report of downfall of India test team.

1. Batting : On papers Indian team batting line up looks much better than their counter part England. Indian team could not muster over 350 runs in Mumbai and Kolkatta, where as English team had two scores over 400 and one over 500 in these two test matches. Indian batsman seems to be in hurry and forgot to play the waiting game, where as English batsman took their time and capitalized on the bad balls, bowled by the India bowlers.

2. Bowling: Indian team relied heavily on their spin bowlers, but they forgot the England team also has top world class batsman in their line up, with their waiting game English batsmen frustrated the Indian bowlers and made them look ordinary on turning India wickets. On the other hand underestimating English spinner made Indian team pay heavy price. In Mumbai test match where the pitch turned square from day one, Monty and Swann took 19 wickets collectively in entire test match inclusive of both Indian innings, where as India spinner took just 7 wickets. In kolkatta match English fast bowlers were much effective that India seamers, as they picked up 10 wickets in entire test match compared to 2 wickets of India pacers.

3. Field Placement: M.S Dhoni did some basic field placing mistake in both the test matches, bu allowing batsman to cement their feet on the pitch by giving them easy singles. It was seen even when batsmen was well set, Dhoni has put men around him, instead of saving singles.

4. Captaincy: Alastair cook seems to be in control of the Mumbai and Kolkatta test match, as his men knew exactly what he was supposed to do in the middle. Whereas Dhoni’s men seems to be clueless of what happening. No India players knew his job and the result English team outclass the Indian team in all department of cricket game in Mumbai and Kolkatta test matches.

I wish Indian dressing room now take their place in the India Test squad seriously and give a better performance in Nagpur test, or else England will go home after winning the 4 match test series by 3 is to 1.