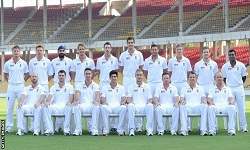 A history was made by English team when they won  the “revenge test series” by 2-1 by making sure that there was no result in the fourth test match played in Nagpur. . They defeated the India lions on their own den. After the Ahmadabad test match many Indian fan across the globe has written off this English team and talks were on the India will win 2012 test series by 4-0. English player showed why they are ranked the number one test side in the world. The application of the players in all three departments (Batting, bowling and fielding) were more superior that Indian test team. Indian team were depending heavily on its spinner, but the web was spun around its own batsmen and Indian batsmen failed miserably on day one turning pitches.

The determination in English batting can be determined by the fact that only one wicket fell in the 5th day of the fourth test match, played in Nagpur. Indian bowlers tried and tried, but could not trouble the English batsmen, this resulted in centuries from Jonathan trott (143) and Ian bell (116). England where 352 for 4 when the umpire called the match off after both the captains gave their consent.

English Skipper Alastair cook was awarded man of the series for his brilliant batting and captaincy, while James Anderson of England won himself the man of the match for wonderful fast bowling.

Conclusion : The death of one man (failure of a player) is tragedy, the death of millions (failure of entire team) is a statistic. That is the arithmetic of war (The rule of cricket matches). Sometimes, however, saving thousands (fans hopes) required only the death of one criminal (fear of failure). We will save those thousands (fans hopes),or we will die trying (give more than 100 %).  After loosing the test matches, Indian team is capable of bouncing back, and it is just that they should kill the fear of failure inside them and play hard in upcoming matches against all the opponents.