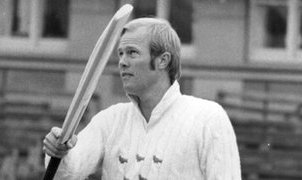 Former English skipper and all rounder Tony Greig is no more. Tony was diagnosed with lung cancer this October, and was on bed rest from quite some time. His fan missed his presences on the television as a expert commentator. Tony died on December 29th 2012, due to cardiac arrest.

Tony had influenced on the game cricket. Tony stood 6 feet 6 inch tall and was a great all rounder. Mr. Greig was born on  October 6, 1946, Queenstown, South Africa. Tony moved to England where he started his test match career against Australia on 8th June 1972. Tony scored 3599 runs in 58 matches with an staggering average of 40.43 where as in ODI’s he played 22 macthes and scored 269 runs. In bowling tony took 141 wickets with an average of 32.20 in test matches.