Highlights of the match
India have won the 4th ODI against West Indies by 153 runs at Holkar Cricket Stadium, Indore. India also won the ODI series after this competition. Virendra Sehwag player of the day made history to pass 200 runs in limited over match. He became the highest runs scorer in ODI ever.During the innings of 219 runs he hit 25 fours and 7 big sixes. After winning the toss skipper Sehwag decided to bat first on good batting surface and fast outfield also he entertained the crowd too much. India set the target of 420 runs for the opposition. West Indies never come back in the field after loosing their wickets in the regular intervals. Indian spinner bowler also did their job to restrict under 300 runs. Virendra Sehwag declared man of the match.
Full scorecard 4th ODI 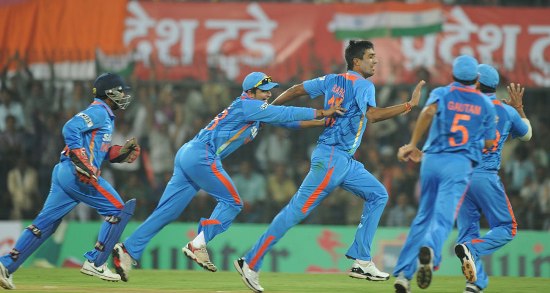