A controversy started between Harbhajan and Symonds

The Indian off-spinner and the star Australian batsman were involved in the infamous ‘Monkeygate’ scandal during a Test match at Sydney in 2007-08 series down under. During match, the controversy erupted at the end of 116th over of India’s first innings, when Harbhajan Singh was accused of alleged racial abuse towards Andrew Symonds. Out of these, this was one of the major controversies in this match between Bhajji and Symonds.

Here is some detailed information about the controversy: 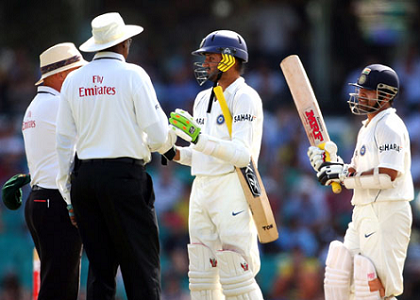 Harbhajan Singh was batting with Sachin Tendulkar for India. Lee was the bowler in that over and Harbhajan had just edged the ball to the slips for a boundary. Bhajji then tapped Brett Lee on the backside with his bat, saying “hard luck” to which Lee did not react. Symonds says he needed to stand up for Lee so in his own words. Then, there were a couple of lines exchanged between Bhajji and Symonds. Indian off-spinner Harbhajan Singh was accused of alleged racial abuse towards Australian all-rounder Andrew Symonds.

The charge was laid after a disturbed Australian Captain Ricky Ponting complained to umpires Mark Benson and Steve Bucknor. 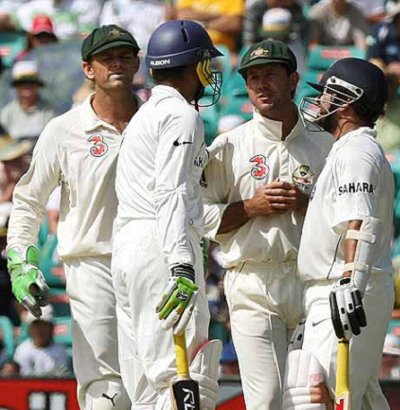 Harbhajan Singh has a chat with Ricky Ponting

Tendulkar, who was batting with Harbhajan when the argument took place, said, “I don’t think it was an issue, a couple of lines exchanged here and there that keeps happening virtually every day” and also said that “I don’t think it’s that big an issue as far as I am concerned. As long as the game moves on and the players don’t cross the limits, it’s fine.”

And on the other hand, Hayden stood for Symonds against Harbhajan.

The allegation was not proved and Harbhajan was banned for three matches. He was charged with a Level 2.8 offence for abuse and insult not amounting to racism to which he declared guilty and was fined 50 per cent of his match fees.

On 7 January 2008, the Indian team announced that they would discontinue the tour pending the outcome of the appeal against Harbhajan’s three match ban. Rather than travelling on to Canberra, they remained in Sydney. The Board of Control for Cricket in India issued a statement stating that the ban was patently unfair.  However, they went back on the suspension and proceeded to Canberra for their next outing.

For more information on the controversies of this match check out Unfair play by Australians and Umpiring Controversies.