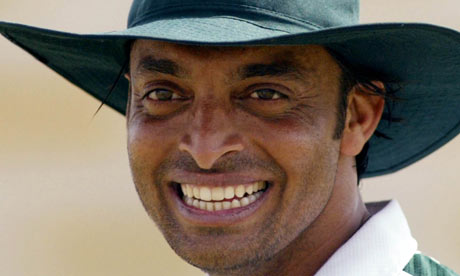 So laughing all the way to the bank ?

So Shoaib Akhtar is at it again. After being in the wilderness for some time the Rawalpindi Express ( sometime he makes all of us feel that this name was bestowed on him by…who else..the man himself). Anyways so the maverick is back in doing what he is famous for. And off course I am not talking about those lethal yorkers and fiery bouncers because that used to happen…Errr…Ummmm….oops can’t remember when was the last time he grabbed the head lines for throwing the balls,…sorry I meant bowling. (Some how the word throwing keeps on making it presence felt when talking about Mr. Akhtar).. Because off late he is been in news for all the wrong and non sports reasons. Yes there was an incident where a ‘Kick’ was involved but even that did not happen on a football field or in a warm up drill before a cricket game. Our man was getting his “Kick” from a banned substance.Err Damn.What’s wrong with me? I am uttering controversial words/statements again and again. May be its the effect of the lead character of this piece.

Let’s start again. I am talking about Shoaib Akhtar. The man who knows the art of being in news irrespective of which side of the boundary rope he is on. If he is inside he is very much capable of bowling lethal yorkers like the ones he bowled to Tendulkar and Dravid in calcutta in 1999. He is the also the only bowler to have broken the 100 mph barrier and bowled the fastest delivery ever recorded. However in spite of all what he has achieved on a cricket field Akhtar’s career was always highlighted by injuries, controversies and accusations of poor attitude. After rising into international stardom at a young age due to his speed, due to his interesting personality and charisma glamour seemed to follow him, some say at the detriment of his sporting focus

Hence, its no surprise that when the cricketing world’s most famous bete noire decided to came out with his biography which is aptly called “Controversially Yours” (though “oops I did it again” could have been on the cover as well ) he found himself embroiled in controversy once again. He has made some startling claims in his book like Sachin and Dravid always played for records, Sachin did not know the art of winning matches but the one which enraged people the most was when he claimed Sachin Tendulkar was scared of him. This offended people like anything. There was wide spread ridicule for Shoaib’s lack of respect for the man who has re-written record books. His book launches in Mumbai and Banglore were cancelled. Wasim Akram was almost baying for his blood. Vinod Kambli who inspite of scoring two back to back double hundreds in Test matches is more famous for being the “best buddy” of Sachin came in the limelight once again for his “bytes”. BCCI went on to extent to demand an apology from the maverick pacer.

So what all these guys were expecting? It was a book written by some one who enjoyed the word talented as much as he enjoyed the word contentious. Some one who was sent home during the Test match series in Australia in 2005 for alleged poor attitude, some one who was banned for drug scandal, some one who was at logger heads with his Board throughout his carreer, some one who hit his team mate and the list is endless. So it should not have shocked anyone as far as contents of the books are concerned. Atleast till the time you have read the whole book. But, the reactions to the book were baffling. Isn’t a free world where people can have their own views?. One can always choose to ignore like master blaster Sachin is doing, or perhaps disagree with him. But to seek to gag him and cancel venues for his book launch as prominent commentator Harsha bhogle says is proof of our growing intolerance.

Shoaib Akhtar was never an angel and he knew the art of rubbing people in the wrong way. This was perhaps the reason why he could not play more then 46 test matches and 163 ODIs. However the man seems to be having the last laugh for he has used the same reason to create the hype and buzz about his book. I would say WELL BOWLED mate.