Fire in Babylon. A Documentary on West indian Cricket's Domination

I have recently been reading great reviews about Stevan Riley’s ‘Fire in Babylon‘, an 88-min documentary on the dominance of the West Indies Cricket team in 1970s and 1980s. Produced by the makers of ‘The last king of Scotland’, the documentary has received rave reviews in film festivals all over the world. See trailer below

The documentary uses archival footage and interviews with the players themselves including the charismatic and authoritative star players like Michael Holding, Gordon Greenidge and Vivian Richards. And as the NYTimes review says, “there are breaks for cricket songs by reggae and calypso musicians, most notably Lord Short Shirt’s “Vivian Richards,” a lilting, evocative tribute to that legendary batsman.”

The movie’s tagline says “They brought the world to its knees and a nation to its feet” which really does seem apt if you see the footage of the fearsome West Indian bowlers (called famously the Fearsome Four – Micheal Holding, Joel Garner, Andy Roberts and Malcolm Marshall  literally bringing batsmen down on their knees with furious bouncers. As the movie claims “No team has ever dominated as this one for so long in any sport”.

Here are some screenshots and the trailer of the movie.

Micheal Holding on his Run Up! Part of the Fearsom Four of West Indian Bowling.

A Furious Bouncer by Joel Garner. Scene from Fire in Babylon Documentary 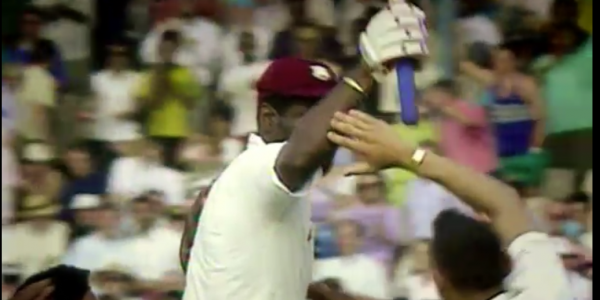 Viv Richards being Hoisted by the Crowds. Scene from Fire in Babylon Documentary

Here are some reviews of the movie

1. the Daily Telegraph says “Director Stevan Riley’s joyous and uplifting film is a celebration of a sporting triumph and all its implications for black politics”

2.  “Fire in Babylon – cricket meets reggae in the breakout documentary of the year”  – SUNDAY TIMES STYLE

3. “Cricket fans will love this documentary about the great West Indies team of the 1970’s and 80’s… the reggae soundtrack helps seal the feel-good mood”  — SUNDAY MIRROR

5. “Gripping… beautiful… intimate… Fire In Babylon is the kind of film that makes you proud to be human” 4/5 stars  – LONDON EVENING STANDARD

The movie has a rating of 86% on Rotten Tomatoes, which means its pretty darned good. I am actually pretty excited and i hope to catch the movie which is almost sold out in the limited screenings in New York. Any one here who has watched this treat to the calypso spirit of cricket? Please share your thoughts.

[…] to join the growing list of detractors is the West Indian great Michael Holding (by the way, do check out the review of the Fire in Babylon, a documentary on West indian Cricket that features Michael […]