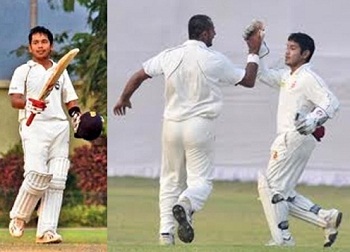 Cricket Highlights is always endeavoring to promote upcoming talent. In our constant search to unearth hidden jewels we bumped into diminutive Punit Bisht. It is difficult to break into a star studded line up which boasts of names like Virender Sehwag, Gautam Gambhir, Ashish Nehra and Vijay Dahiya. Considering Punit did so without having any god father and that he has now cemented his place is a reflection of the hard strides put in by the lad who comes from a humble background. Like many aspiring cricketers he too started early at the age of 13 under the tutelage of Mr.Mohan Sharma at Jawahar Lal Nehru stadium. It was immense faith shown by him in his ward that Punit started gaining confidence in his abilities. Punit says “I was fortunate to have a coach like him at the initial stage of my cricketing career who supported me through thick and thin and was never short of criticisms when I failed”. Once he started making his mark he as spotted by Mr. Ajit Chaudhary who introduced him to big league of Delhi cricket. We got talking to the simple lad who is now been keeping the wickets for the Delhi Ranji Team for the last six years. Here are the excerpts :

Cricket Highlights : so did you always wanted to play cricket or any sport would have been ok?

Punit Bisht : Cricket has such high passion in India that as soon as you start to walk you carry a bat in your hand. Same was the case with

Cricket Highlights : Lakhs and crores of people play cricket in INDIA but only 16 make the mark,didn;t u realize that it’s a huge risk

Punit Bisht: Yes, i was aware about the risk but then i had confidence in my capabilities.

Cricket Highlights: You are doing good for yourself,playing for a state like Delhi is no less achievement so what were the earliest

signs that you can actually play at this level.I mean were there any doubts in your mind or you were always sure of

Punit Bisht : Initial apprehensions were there but when I started performing consistently at the competitive club level cricket those

fears simply vanished. And once i got that feeling that I belong here I was always sure that I would make a huge mark

Cricket Highlights :Lot of people drop out.So did you also feel at some stage that it will not work out?

Punit Bisht: Well to be honest, I have been a regular feature in the Delhi state sides right from the 1st time i played under-16, so till now

I havent got the chance to feel that way and hopefully never will as well.

Cricket Highlights: Is system is really that bad what it meant out to be or u think no its a fairplay and anyone who is really talented will be

Punit Bisht : well i personally feel that if you are talented enough then the system will be fair to you. I come from a very humble family

back ground but still i made a mark in delhi state cricket.

Cricket Highlights : what were the initial influences who made you pick up a bat on the first place?who were your role models?

Punit Bisht: My mother was a great influence in me taking up this sport. She always encouraged me to pursue my dreams.

as for the role models, being a wicket keeper i have always been a huge fan of IAN HEALY.

Cricket Highlights : How has IPL changed life for an average cricketer?

Punit Bisht: Well as you said earlier in a previous question when i took up cricket we had to fight for 16 places, so as

Cricket Highlights : .Is BCCI as a governing body doing enough or you think some changes are needed the way game is

being run in our country?

Punit Bisht: Well at present BCCi is doing more than any other cricketing board in the World cricket. The standard of stadiums, the

quality of cricket, the new tournaments like corporate trophy or IPL for that matter is all for the betterment of local

Cricket Highlights : You play for Delhi.So how does it feel to rub shoulders with one of the biggest cricketing names like Virender

Sehwag,Gautam Gambhir or for that matter Ashish Nehra?

Punit Bisht : Meeting the greats of cricket and sharing the same dressing room with them is the biggest pleasure that i have achieved

while playing cricket. Apart from that picking up their mind on game and what preparations they go through before a

game is an excellent learning experience.

Cricket Highlights : What has been your most memorable performance and why?

Punit Bisht : Being the top scorer for Delhi in the season 2009-10 has to be the most memorable period in my life. Because with the

quality of players there are in the Delhi ranji trophy team and to be the best among them has to be a fine achievement.

along with that 166 that i scored vs karnataka in my 2nd ranji trophy match has to be a close second.

Cricket Highlights : We know there is a lot of money at domestic level now but things were different some time back so were there any

family pressures to leave the game or they always supported you?

Punit Bisht : Well luckily my family has been really supportive throughout my cricketing career.

Cricket Highlights: If punit bisht wouldnt have been a cricketer then what would he be doing?

Punit Bisht : To be honest i never thought about that as i started playing at a very early age and since then all i have ever wanted is

to play this game.

Cricket Highlights: Thanks a ton Punit,It was great chatting with you today.Hope to see don the national colours. I on behalf of Cricket

Highlights wish you great success. All the best.