The Trent Bridge test is continuing to produce its moment of drama and excitement. First was India reducing England to 124/8 on the first day. Then Stuart Broad stages a comeback to lift them to 221. India dominate with Rahul Dravid scoring a century, only for Broad to come back and script sensational hat-trick, reducing india to 288. And then Ian Bell powers England only to be bizarrely run out and then Dhoni recalling him. And then india get both bell and Morgan out. Trott then returns despite being injured and very firste few balls there is a huge appeal for LBW. It was plumb out. Dont know how the umpire didnt give it. Even the commentators said this was plumb. See the image of the ball hitting the stumps. Too bad the umpire Erasmus didnt see it that way 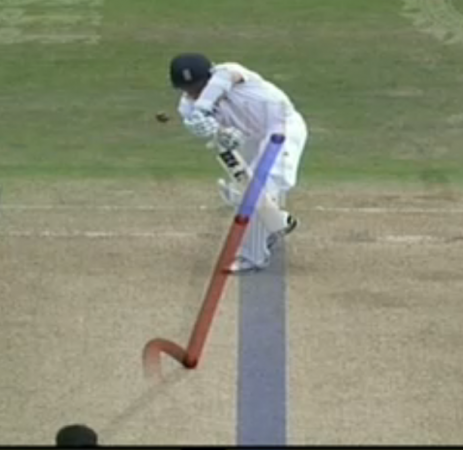 Ian Trott was Plumb LBW. But Umpire Erasmus was not convinced. Too bad there is no DRS review

Eventually, Ian Trott didnt last long. Kumar got his scalp in the next over.

Praveen Kumar got Trott out with a snorter, after a plumb LBW was denied 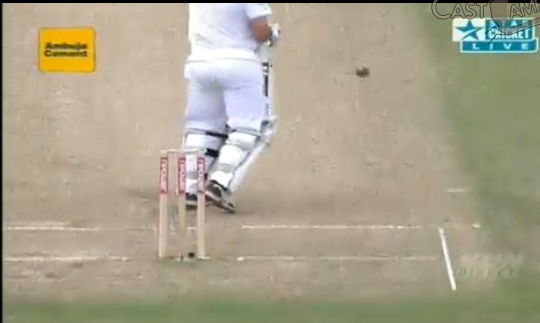 Trott gives away in the slip

As cricinfo says
“Kumar to Trott, OUT, 120.3 kph, Trott’s gone, India are right back in it. Or are they? Broad’s yet to bat … Meanwhile, lovely ball from Praveen, he gets it to do a Garner on Trott from just outside off. Short of a length outswinger, lands innocuously back of a length and then jumps up as it goes away. Trott was pressing forward, and too far committed to pull back of drop the wrists. The ball kissed the glove and carried to Dravid at slip.

PK scowls. Always means he is happy.” – ha ha, cricinfo guys are having a gud time with Praveen Kumar

Did Dhoni do the Right thing by Recalling Ian Bell Run out in the Trent Bridge Test?