When Kumar Sangakkara started his MCC spirit of Cricket lecture (read full text of Kumar Sangakarra’s MCC Speech) at Lord’s not many would have thought that by the time he would step down from the dais,  lot of people in Sri Lankan Cricketing circles would be feeling uneasy. However that number would definitely be outnumbered by a huge margin of those who felt extremely proud of the things former Sri Lankan skipper mentioned.

It was a superbly crafted lecture who touched upon important topics like future of test Cricket,spot fixing and corruption,history of Sri Lankan Cricket and its importance in the lives of an average Sri Lankan and the way Sri Lankan cricket has been run.The last two topics evoked profound reactions back home albeit contrasting ones.While on one hand a Sri Lankan Cricket fan whose passion according to Sangakkara is what drives the cricketers must be overwhelmed,on the other those who runs the game in the country would not find it pleasant the diatribes against them by the wicket-keeper batsman in an hour long speech.

According to Sangakkara Sri Lankan people during colonization era were fiercely opposed to westernization of society “At times summarily dismissing western tradition’s influence as evil and detrimental.Yet, Cricket somehow managed to slip through the cracks in the anti-western defenses in our society and has now become the most precious heirloom of British colonial heritage”.He talked about the civil war and how it was the period of pain and suffering for a majority of his fellow citizens but Cricket played a crucial role acting as a soother to the citizens.He said that while residing in Colombo the financial capital of the country one doesn’t realize the hardship others living in the less safer areas of the country has to go through.But,that attack on Sri Lankan Cricket team bus in Lahore made him sit up and take notice of distress and adversity all those who experience first hand violence day in and day out have had to endure.

He praised Arjuna Ranatunga as a leader with character,ability and above all courage to change the system.
“Before his arrival we were playing by the book just for the love of the game.He converted that love into a shared fanatical passion which 20 million people embraced as their own”.He further used the incident in boxing day test match in 1995 at MCG to rally the team.Murali was no-balled in that test match and that proved to be a catalyst which spurred the team to do the unthinkable.Become world champions just 14 years after obtaining full ICC status.That victory in 1996 was the panacea for all social evils and Sri Lankan Cricket had become a harmonising factor.”The cheering of a nation that night was a sound no bomb or exploding shell could drown”.That’s how Sangakkara summed up the mood after the world cup final.

But,the victory brought with it certain ills as well.From a voluntarily led organisation by well meaning men of integrity into a multi-million dollar organisation which has been in turmoil ever since.Even the players became part of power games and those who came to power manipulated player loyalties to achieve their ends.All this led to rift,ill feeling and distrust.From a close knit unit of 1996 the team was a collection of individuals with no shared dream.that explains the debacle of 1999 first round exit.

Further continuing his scathing attack on the cricket administrators in the country Sangakkara said “to cosolidate and perpetuate powers administration doors were opened to partisan cronies and accusations of vote buying,rigging,players interference due to lobbying of each sides and brandishing of weapons characterize Cricket board elections.They(administrators) have to become professionals,forward thinking and transparent other wise common man will be alienated and loyal fans will be disillusioned”.According to Sangakkara its not the players or administrators but the passion of fans which sustains the game.If things don’t change quickly the whole system will come crashing down.He advised ICC too and sppealed that a stand to suspend member boards with any direct and detrimental political intereference and allegations of corruption and mismanagement should be taken and all the funding and accompanying benefits should be scrapped.

Finally former Captain was of the view that we need to be more Sri Lankan and less selfish.”We need to seize the moment only then the future of Sri Lankan cricket will remain bright.I pray we do because cricket has an important role to play in the island’s future”. While the sports minister had ordered an inquiry against Sangakkara the south paw has found support with many people coming to his support.Noted Cricket writer Peter Roebuck said sangakkara delievered the most important speech in cricket history. Brushing aside the twin temptations of romance and sentiment, the erudite Sri Lankan has dared to confront the truths about cricket in his country. Along the way he struck many meaty blows on the game’s behalf. His discourse was nothing less than a challenge to cricket to set higher standards for itself, to reject jealousy, pettiness and greed, and to become part of the enlightenment.

Sangakkara recieved a standing ovation after he finished.Though he may have received a lot of them for his on field displays in the past this must have been extremely satisfying for the man who is known for his integrity and straightforwardness.The speech brought forward the significance of the game not just in the lives of a Sinhalese but it also highlighted the discomfort present Sri Lankan Cricketers are experiencing in dealing with the people who are only interested in personal gains and are least bothered about the development of the game in the country.He spoke about freeing the cricketing boards from government interference all over the world but he was obviously referring to SLC (Sri lankan Cricket) where the selectors can always be over powered by the sports minister.This sort of arrangement must be disturbing for any one who believes in fair play and merit.

As Peter Roebuck of Cricinfo rightly says his speech at Lord’s should serve as a wake-up call to administrators to use the game to serve people, and not for selfish gains. 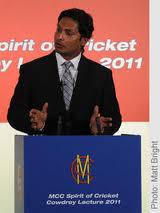 Which team in IPL do you hate the...

How many cameras are used for broadcasting a...

Singh was King Last Year! Who is the...

Fabulous article.It serves to raise the stature of a gifted player to an unprecedented level. Sangakkara has always been a treat to watch on the batting crease – his speech proves he has a great head. Tragically,I dont see any Indian player having the courage to speak against the crass commercialisation of the sport – our players are either high on the moolah flowing into their accounts or busy securing future positions. Lest we forget, Sangakkara heaped praises on India – when we won the World Cup – in a manner few losing captains would.

Anil very true. Sangakkara is very learned man, and the way he lined up his speech was just out of this world. Cricket was always considered a noble game, and Sangakkara is a great ambassador of this game.

perhaps they (indian players) dont really find it bothersome.especially conidering what all they have achieved in the past.numero uno in test matches,world cup winners and overseas victories makes sure that nobody be it players or the administrators or even the fans make any bones about it.May be all this has really helped us.all this big money has meant that players now feel more financial secure and thats why we see more n more players askin for rest which never used to happen earlier..new kids on the block dont look like cat on a hot tin roof as they come better prepared not just for a different level of cricket but also for the adulation they gonna get if they happen to succeed at the highest level, so may be all god has been kind to us as things could have really gone haywire……but still all this can come back to haunt us if we start loosing because thats the time when most of the introspection takes place.