Will India win the Second test at Trent Bridge? England already have a 300+ run lead. Statistically india have a very low chance of wining this match. Because they have scored more than 300 runs only two times to win a test match. Their highest being 407 against west indies in 1976 and 300+ against England in Chennai.

See the list below. I think, given this and the fact that india have yet to score 300 runs in this series against england, they have a very low chance of winning the Trent Bridge Test 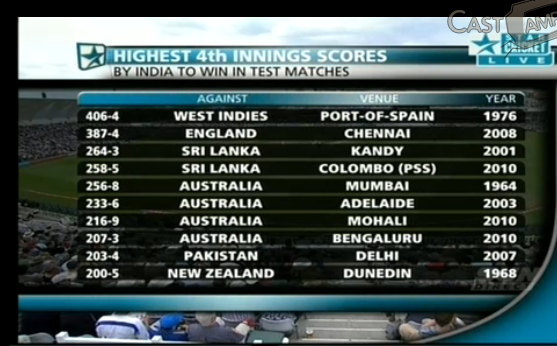 India have score more than 300 only twice to win a test match in the 4th innings.

Also the highest total in the 4th innings at the Trent Bridge Ground itself is 440 – scored by New Zealand vs England on 7 Jun 1973 (Cricinfo). The highest score at Trent Bridge is 658 scored in the first innings. See the list of top scores at Trent Bridge (source: Cricinfo)