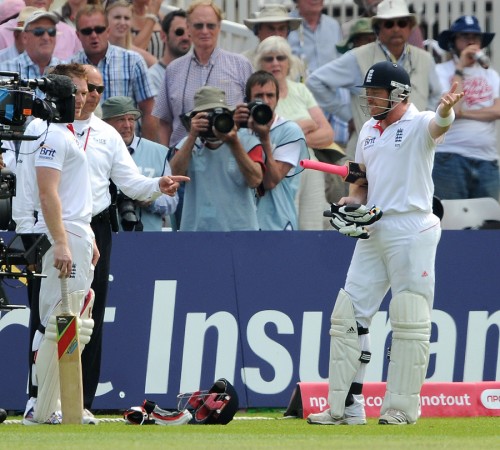 Ian Bell Foolishly Runs himself out just before tea. MS Dhoni recalls him, in the spirit of the game

Hundreds of media reports and thousands of tweets have been flying around with relation to Ian Bell’s Run out Drama (Bell-O-Drama, as reported on Cricinfo). We posted our thoughts on MS Dhoni’s decision to recall Ian Bell after the run out

Here are some comments from cricinfo, twitter and cricket exerts

Ian Botham: “My attitude is it was the right decision by the umpires, they did everything spot-on. The man at short leg was screaming at the players to get the ball in because Bell had wandered off, it was just one of those parts of a learning curve. He was out and he should have stayed out, in my opinion.”

Former England skipper Michael Atherton said Bell had been “guilty of doziness” and praised Dhoni for his “magnanimous” decision to withdraw their appeal against the run-out.

Legendary Australian bowler Shane Warne added: “There is no black and white here. We all feel warm and fuzzy but Ian Bell has learned a good lesson – don’t be dozy.

Meanwhile, Michael Vaughan on BBC Test Match Special’s: “I think the right decision has been made. If I put myself in the same position as Mahendra Singh Dhoni I would have done the same. Ian Bell went to Eoin Morgan and said four and Kumar on the boundary gave all the body language that it was four. And if over was called then it has to be the right decision.”

Swapnil: “I place all the blame for the Bell-o-drama around tea-time solely on Rahul Dravid; had he not placed that shot supremely between extra-cover and mid-off yesterday Trott would never have injured himself and hence Bell would never have batted at number three!” Dravid is always the villain!

@Lalit Kumar Modi : The stand Indian Team took today in the Ian bell case-was the right thing to do, even thou they did not need too. Kudos to the Indian Team.

@Venkat Ananth: Future IIM personal interview question: “Would you have called Ian Bell back?” – ha ha – that is a great one.

@Faking News: What booing English fans experienced after Dhoni reversed decision on Ian Bell should be called DPLK – opposite of KLPD – okay, i dont know what DPLK means but , good one.

@fakingnews Faking News : Ian Bell did a slutwalk. He was not asking for it.

@ed_sun: In a controversial incident at the cricket, Ian Bell has been run out whilst eating a sandwich at tea.

There is noticeably a bundle to know about this. I assume you made certain nice points in features also.http://crickethighlights.com is really good.

‘Cricket is a great leveller’. Is Mahender Singh Dhoni its latest Victim After India’s Rout in England | Covering Global and Local Cricket August 4, 2011 - 1:02 am

[…] should finally score that much awaited 100th ton. Hopefully ICC comes out with a ruling that in the wake of bell-o-dram,  irrespective of whatever is the result of this series,  India will still be No1 forever […]

dhoni shouldnt have called him though. he was out