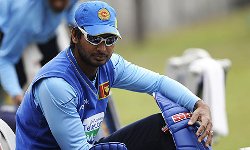 Kumar Sangakkara takes out time from his hectic schedule to answer his followers on twitter and facebook on his world cup 2011 journey, his future and other teams.   He spoke one different topics from world cup finals to his journey to become SriLanka cricket team captain. He also spoke on his cricket journey and his life and why he resigned as captain for Sri lanka team. Here are some question he answered.

Michael Chadbone – Who is the toughest bowler you ever faced and why?

Hassan – What are your future plans?

Future plans are to play to the best of my abilities, score as many runs as I can for the side, you know until I can’t do it anymore.
Mohamed – Would you consider becoming a tv commentator when you retire?

Hopefully not as a full-time job, but maybe once in a while just to keep in touch with the game, maybe. But I would like to do something completely away from cricket.

Adil – If the current Sri Lanka team that you captained to almost lifting the 2011 World Cup got in a time machine, then traveled 15 years ago and played Arjuna Ranatunga’s 1996 World Cup winning side, who do you think would win?

It will be interesting to actually do that and depends on the rules whether they are the current rules with the one bouncer and the powerplay rules. I think in that sense we might have the edge. But if it is under the old rules with the 15-over limit, I think the 1996 World Cup winning side was very strong, but it is always going to be a close game. I think they were a fantastic side with fantastic batsmen. So, I don’t know, maybe we have the edge (laughs).

Alex – Do you think that you will be able to play the ICC Cricket World Cup 2015 and what do you think about the future of Sri Lanka cricket team?

I don’t know it’s a long time away. I wouldn’t really think that far ahead. But if I am performing and I am physically fit, it might be an interesting challenge. But it also depends on what the side wants to do. The Sri Lankan cricket team has a great future. I think we have some great players who are currently playing. Also we have some great players who are about to break into the national side. So the health of Sri Lankan cricket is very strong and very good. It’s just how we nurture and funnel the talent and the ability through, that is the more important question.

@sandeepDcritic Why did you choose to step down as captain?

It is definitely not because of the final and losing the final. That was never an issue. It was a decision I had taken well before the World Cup for reasons that are very clear when you are an intrinsic part of the local cricketing set-up. It is something a bit harder for an outsider to understand or maybe fathom and see. But it is not an easy job. It is a job that is quite tough, with what happens in Sri Lanka cricket both on and off the field. And it is only a job that you do for as long as you enjoy it. And once that goes away, I think it’s time to give it up.

@deepaky – How do you rate Dilshan as a captain? Does he have the potential to take Sri Lanka to a higher level?

I think Dilshan will be a very good captain. He is an aggressive player. He has got an aggressive mindset. A free attitude that might help him in his captaincy, if he funnels it very well into what he wants to achieve. And I think with him as captain and also with the quality of players with we have, Sri Lankan cricket will be improved because usually it’s a lot more to do with the execution of the game on the field by the players concerned and direction given by the captain and coaching management that counts. So I think Sri Lankan cricket will improve under Dilshan.

@ZENIACUNHA What has been your favourite Test innings so far?

I have always wanted to score a hundred against Australia. So my 192 at Hobart would probably be the best.

@RaisyN What was going through your mind when you lost the World Cup final to India?

Ha, well just heartbreak and disappointment. Its a never a good feeling to lose such an important game. It’s the third time I have been there in a World Cup. In 2007 it was as bad, 2009 T20 World Cup we lost that one again. And for it to happen a third time was devastating. But you know at the same time we had that feeling, that we were just outplayed by a better side on the day.

@cricktstats What is your ambition in Tests, ODIs and T20s?

Well I would like to score 10,000 runs in Tests and ODIs, it’s not far off that mark at the moment. But also in T20s, you know just win as many matches as we can and hopefully win….if we qualify for the Test Championships, try and win that hopefully. Again, if get the opportunity to play another World Cup try and win that. That will be just fantastic. So just win championships and tournaments and matches in all three formats, that will be my ambition.