Was Duncan Fletcher, the new Indian Cricket Coach too Optimisitic about India Ruling Cricket for 10 Years? 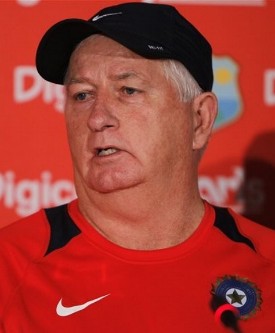 Duncan fletcher is just a fortnight old into Indian cricket and has already seems to be in awe of abundance of talent. He must be obviously apprehensive while collecting his boarding pass to Carribbean after being given a team bereft of six biggest stars of Indian cricket that too on his maiden assignment. But some shoddy display by the host nation coupled with stupendous showing by Suresh Raina led squad meant that the last two matches of the five match one day series became inconsequential after India won the third rubber and the series.

The man who believes in dealing with each player on a one to one basis must have heaved a sigh of relief because even though West Indies never started as favorites it is always good to start with a win under the belt. Expectedly Fletcher was on cloud nine but what came as a bit of a surprise was when he said “Indian team can rule for the next ten years or at least five years.”

Pardon my skepticism despite the fact I will be on cloud ninety myself, if what fletcher says comes true. But its a preposterous statement to make more so when the series has just started. Although a second string team India has managed to beat Windies in their own den its a known fact nevertheless that the island nation has been on a downward spiral for some time now. Inspite of having impact players like Chris Gayle,Darren and Dwayne Bravo, Darren Sammy and Ramnaresh Sarwan they have failed to put their act together. Fletcher’s claims means India will be doing what West Indies and Australia has done in the past. But can we put India in the same bracket as those two once invincibles teams? Perhaps we can but we need to be patient as those are big boots to fill and lots of things have to be done right.

First and foremost India needs to start winning more frequently in an away series. We still have to register a test series victory in Australia and South Africa and unless that column is ticked the journey to excellence would remain incomplete. We are no doubt one of the greatest one day teams but test victories against Australia,South Africa and England in their home turf is what would make Mahender Singh Dhoni and his men a truly accomplished lot.Another thing which needs to be kept in mind is the inception and culmination of golden eras of great teams usually coincides with those of their stars. Australia started crumbling when Shane Warne,Glenn Mcgrath, Adam Gilchrist, Justin Langer and Matthew Hayden all hung their boots almost simultaneously and Windies never recovered once it’s great players went into retreat. So Fletcher not just have to ensure a smooth transition when Sachin Tendulkar, Rahul Dravid,V.V.S Laxman and may be Zaheer Khan decides to hang their boots but also have to keep this new found killer instinct intact.

It remains to be seen if that happens and if Fletcher makes his preposterous statement a reality then who knows we might be sending second or even third strings to South Africa and Australia. High hopes. Yup. But one should always hope for it is a good word (Shaw Shank Redemption).

What do you all think? Need Comments!